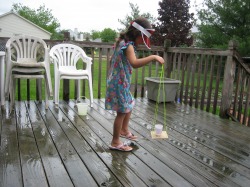 We studied the Astronomy Adventure and spent several nights looking at the stars and the moon.  Kasi even named her own constellation.  She called it "Bright Horse".  In the picture shown to the left, we are experimenting with artificial gravity.  The cup is filled with water and the idea is to zing it around and around without spilling any. 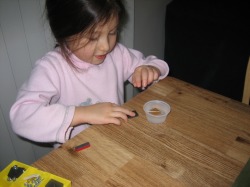 We enjoyed the Magnetism Adventure.  In the picture to the left, Kasi made her own compass by magnetizing a needle and floating it in a cup of water.  Pretty cool hey?

The course also teaches how to read a compass and we had fun setting up courses and finding the hidden treasure at the end.  This one is highly recommended for ages 5-7.

The Wonders of Light 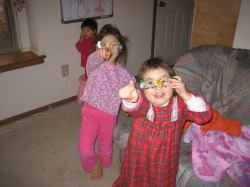 The Wonders of Light is our favorite study yet.  In this particular lesson shown in the picture, the girls are testing out their rainbow glasses.  When they look at various light sources with these prisms on their face, they get to see all sorts of rainbow patterns.  I didn't do it on purpose but when I took the picture of them, the light from the camera evidently made a really cool rainbow pattern.  They were very excited right as I went to snap the picture.  It turned out to be a perfect shot. 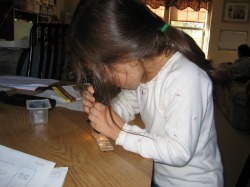 In this picture, my 5 year old is investigating a ladybug via her 30X pocket microscope.  We finished each of the 14 Microscopic Explorations lessons and had a great deal of fun in the process.  Basically, the idea behind the package is to introduce young children to microscopes and that it did quite well.  I'm very happy with it, especially considering that our microscope kept blowing bulbs.  I wrote the company about it and also to ask if they would give us a new vial of protozoa, since we never did see anything show up in that particular experiment.  They responded to me immediately and were happy to send a new vial and also a new microscope. 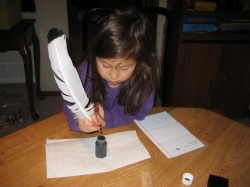 We are now going through our Bird study.  It is also from Homeschool Science/Stratton House.  It has many interesting lessons to look forward to.  The first thing we did was put together a bird feeder using a 16 oz Diet Dr. Pepper bottle.  It simply screws on the base that is supplied in the kit.  So now we get to watch and attempt to classify our birds.  The kit includes a bird guide to help us and even a set of binoculars to see the birds with.  We have already learned that different bird seed attracts different types of birds.  We have also learned that these birds in our neck of the woods are pigs!  In the picture here, we are using a Turkey feather as quill pen.  This was an activity to go along with our learning about different types of feathers. 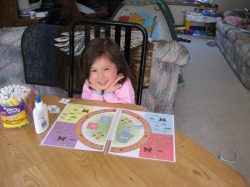 When Kasi was 4 years old, I used a science package from McRuffy Press.  It was actually very good in it's own way.  It taught many fundamentals for the K level and the publisher claims that it meets all of the National Science standards for that level.  The only reason we decided to jump ship this year was to get a little more excitement into the lessons but I think using McRuffy first was the right move.  I am now using it for Ksena, who is 3 years old right now. 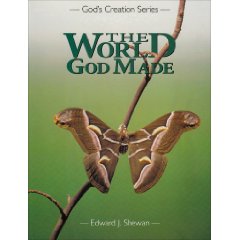 I want to point out that I have supplimented a number of biblical-creation science packages in as well, such as the one pictured here.  I covered some of these when Kasi was only 3 years old and will cover them again with Ksena now and later with Joelle.  As Christians, we must remember that science comes from God.  Science (Man's conclusions) are never above God or the bible.  The bible is always our starting point for determining what is true in life.  The neat thing about Creation Science is that it confirms God and the bible.  Young children understand this well because it is logical thinking.  Also they haven't been corrupted by the media or the public schools yet.   You can probably find this book for around $5 or $6 using DealOz.